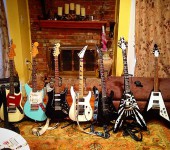 Having talent and the luck of the draw sounds great but there’s more to making a band successful. Sure there are plenty of bands with tons of talent stacked up atop great songs and expert playing, but are they getting they’re name out there?

Are you getting your name out there? Is it that these bands just aren’t practicing enough or they’re music just wont come together? In this post we’re going to cover some of the reasons bands fail and what that special ingredient is that turns playing in garages to selling out shows.

First things first: PRACTICE! This should come as no surprise but I wanted to put it on the list because a lot of bands actually tend to neglect this. If you’re only practicing once every two weeks, your music is going to sound choppy and you’re not gonna be able to pull it off live. Get together with your band mates at Rapture Sound Studio. You can plan out your practice while in our lounge, this way you’ll get the most out of each session. You should collaborate and figure out what songs need the most work, if a bass part needs tweaking, etc. These are all essential topics for having a successful practice session. Now that you have some guidelines to follow you can start planning out your bands future, remember practice makes perfect but practice isn’t the whole story.

2. Have Fun, But Be Professional

One of the most common early killers of countless new bands a lack of professionalism. If you have band members showing up late to rehearsal or not at all how can your band be taken seriously? You have to make sure they when its time practice they best come wearing their big boy pants. Think about how much awesome music never got made because someone’s drummer couldn’t summon the energy to arrive with the rest of the band?

But there’s more to being professional than being on time, you also have to keep your band clear from distraction and negativity. When you’re practicing, writing new material, or even out gigging you don’t want people around who are going to diminish the hard work you and your band mates put it. Whether it’s a new girlfriend causing trouble between members or even a band mate that’s partying to much, you have to keep your group clear from distractions.

Another issue that lots of bands have when they start out is communication: talking is key. If you plan on keeping your band in the local scene but your guitarist wants to rent a van and start touring, you’re going to have problems sooner than later. It’s important to have regular band meetings where you can discuss the future of the band and your goals. If no one knows where the band is going then the band wont go anywhere at all. Every great band in history had to set clear benchmarks and make hard decisions to get where they are today. A good example is Metallica, a band famously know for bumping heads with each other but the fact they were willing to put there thoughts into words is why they are who they are and their music is proof of that.